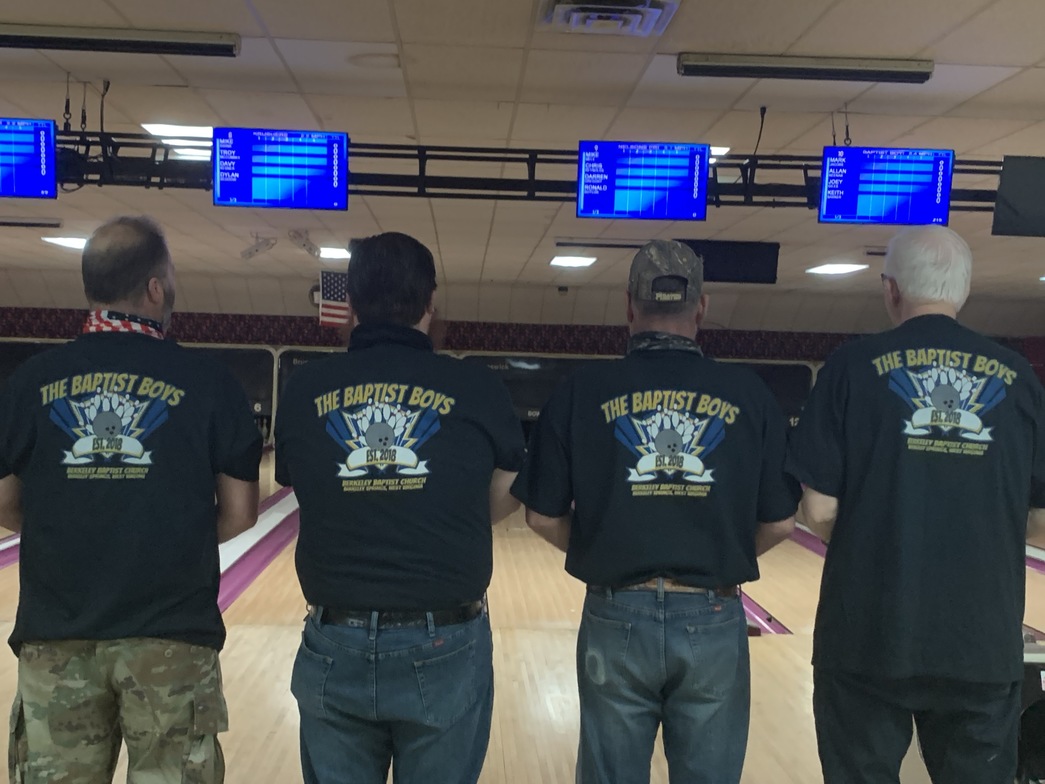 How many of you knew that Berkeley Baptist Church had its very own bowling team? In 2018, Pastor Joey was looking for a hobby to help him alleviate some stress. He has always loved to bowl, so he started looking to put together a bowling team. He knew that Berkeley Springs Bowl & Fun had a Monday Night Men's Bowling League. So, he started asking around to see if any men would like to start a team. In the Fall of 2018, the first group of Baptist Boys hit the lanes at Berkeley Springs Bowl & Fun.

The first team was Pastor Joey, Allan Keenan, Chris Simonpietri, and Ken Nett (2018-2019). Unfortunately, during that year, Ken Nett had to leave the team due to moving out of state. Randy George came on and joined the team and stayed on for the 2019-2020 bowling season. Next, the team lost Chris Simonpietri because of a move after he was remarried. Tom Hall was able to join the team for the remainder of the 2019-2020 year. The team for the 2019-2020 year was unable to finish out their last few games due to COVID-19. Randy had to step back from the bowling team due to having shoulder surgery but he has been able to fill in a few times during the 2020-2021 year. Tom also did not rejoin the team for the 2020-2021 year. With Randy and Tom being unable to bowl, Pastor Joey and Allen had to find two new arms! They found those arms in Keith Barker and Mark Jacobs. With Keith joining the team there has also been an extension of the Baptist Boys on Wednesday nights. Keith and his son Chase are Baptist Boys 2.0 in the parent/youth league.

This summer, there will be two teams from Berkeley Baptist in a nonsanctioned men's league. Team One will be made up of Pastor Joey, Allen Keenan, and Tom Hall while Team Two will be Keith and Chase Barker alongside Randy George. For anyone interested in representing Berkeley Baptist Church in a bowling league, there are hopes of having two four-man teams for the 2021-2022 Fall Men's League, as will a new four-person mixed league (any combo). There are also two established leagues, one on Monday afternoons and the other on Thursday evenings. For more information on participating in any league, see Pastor Joey.