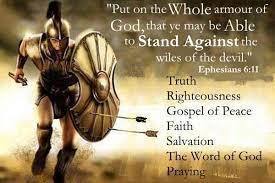 Good news! Jesus has given us the tools of the Spirit, battle armor, to combat the devil! Now, when Paul wrote the Ephesians about spiritual armor, Paul knew nothing of medieval armament. When Paul gives us a description of the spiritual armor of a Christian, imagine a Roman soldier's gear!

First, there is a belt of truth! A belt was (and for some of us still is) an important part of a soldier's uniform. Not used primarily for holding up trousers, it's main purpose was to hold the sheath for their gladius (sword), their main weapon of defense! God's word is like a belt around our waist, supporting us in times of trouble.

Third, sandals of Gospel preparation. Footwear was another overlooked but crucial element to a soldier's uniform. The Roman legion marched, not rode, and therefore soldiers had to be prepared to move many miles a day. Proper footwear was essential. The Christian must always be ready to share the good news of Jesus Christ. It is the breath on our tongues, waiting to be exhaled! The Christian quick to give glory to Jesus is the Christian not likely to fall into sin's traps!

Fourth, there is the shield of faith! While a gladius was good, the shield was probably a Roman soldier's greatest weapon. Not only was it used for defense, individual and group, it was also a good weapon in and of itself. Likewise, our faith knocks backs the fiery arrows of Satan, arrows like doubt, troubles, and tribulations!

Fifth, the helmet of salvation. Helmets protect one thing, the head! Confidence in our salvation is key to fighting off evil! The Good New Bible, a guided New Testament Bible, is quick to answer the "now what" question after you have been saved! Their first bit of advice, be assured in your new salvation and life! Trusting in our salvation keeps the devil out of our heads!

Sixth is the sword of the Spirit, which Paul says is the Word of God! A sword is essentially an offensive weapon. Revelation describes the conquering King as having "a double edged sword coming from His mouth." In the Left Behind series, the returning Jesus speaks Scripture and the enemy falls before Him, literally flayed by the Word of God! A Christian without a Bible is like a soldier without a sword, and a Christian who doesn't study his Bible is like a soldier who has not practiced using his sword!

Paul's final admonition is prayer. Just as a Roman's soldiers uniform wasn't complete without EVERY PIECE OF EQUIPMENT, so spiritual armor is incomplete unless covered by prayer!

However, I would add one more element that Paul didn't consider! A well trained soldier can fight against extrodinary numbers, but ultimately he falls to overwhelming odds! We've all watched movies where one man stands against vast numbers and fights to his final breath. The problem with a "final breath" is that you die. If a soldier fights with other well trained soldiers, they conquer and survive. Christians, you cannot neglect the fellowship that the church offers. A Christian who doesn't go to church is a Christian who suits up in armor to fight alone! However, the fellowship of believers is also akin to the gathering of a spiritual army!

Paul's command is clear: do not let evil get the upper hand; instead, you conquer evil! How do you plan to do that Christian? I suggest gearing up and joining the army! Find a good church and get involved!