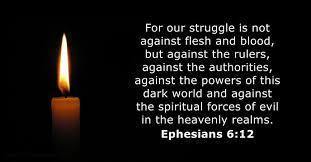 Have you ever felt that the odds were just stacked againt you? I'm reminded of that Mary Chapin Carpenter song, "I Feel Lucky," that was released in 1992. One of the lines says, "the stars are stacked against you girl, get back in bed!" We are in the midst of a great battle between good and evil, but make no mistake, our "Redeemer lives, and at the end he will stand on the dust." But this doesn't mean we need to neglect our spiritual armor or not be aware of who our enemies are!

The first reality is that it isn't other people who we fight against. In fact, believer or not, others are in this same spiritual battle we are in! They are either winning in Christ are losing apart from Christ. So if it is not against other people we fight, who is it we wrestle against?

Paul says rulers and authorities. Sounds like people to me, but it isn't earthly rulers we're talking about. I love Harold Hoehner's explanation in The Bible Knowledge Commentary: "it is a spiritual conflict against the spiritual 'Mafia.'" He goes on to say that "while satanic forces cannot be fully categorized, the first two" are rulers and authorities! Jamieson, Fausset, and Brown (Commentary Critical and Explanatory on the Whole Bible) add that the emphasis of principalities (rulers) and authorities is likely a reference to the same grade of powers as angels and demons. They go on to say that "the more clearly any book of Scripture, as this [Ephesians], treats of the economy of the kingdom of light, the more clearly does it set forth the kingdom of darkness."

Paul sums up those power and authorities as "the cosmic powers of this dakrness." The same Greek used in this phrase is used in John 14:30 and 16:11; 1 John 5:19; and 2 Cor. 4:4 to refer to Satan and his reign as the prince of this world! So we are at war with evil, with demons, and with Satan!

Paul uses all of this as a lead up to putting on the whole armor of God (a devotion for another day). However, it is important to note two things: first, we are in the midst of a battle! Satan desires our souls to be damned to hell with him. As the saying goes, misery loves companly. Second, God does not leave us to our foes without support. He has given us spiritual armor to tackle the problem of Satan. Therefore, we should put that armor on daily!

Go forth and fight the Devil!